Media Contact:
Jonathan Jaffe
908-789-0700
This email address is being protected from spambots. You need JavaScript enabled to view it.

OCEAN CITY, NJ – March 22, 2018 – There was plenty of time for serious discussion about discarded plastic bags on the beach, about trash in urban waterways and ways to ensure school buildings recycle as much paper as possible.

And the annual Environmental Exchange – concluding tomorrow – included plenty of hands-on opportunities for 108 students across the state to participate in roundtable talks, get a bird’s-eye view of efforts to fight beach erosion and see what it takes to create their own rain barrels.

The prevailing message? We are borrowing the Earth from our children, and we need to take care of it.

The two-day event is run each year through the New Jersey Clean Communities Council (NJCCC), which works to ensure a strong cross-section of students from throughout the state participate in the program. This year, there were nine schools, each with 12 students, in attendance, said NJCCC Executive Director Sandy Huber, who secures new host communities each year and oversees every facet of the program.

Students began their work this morning observing the snowy sands of Ocean City, where the city’s public works department was spreading out sand, following the nor’easter that caused the sand to cliff on the beach. From there, the students went to the Music Pier on the boardwalk, with stunning views of the Atlantic Ocean, for interactive activities.

They had the opportunity to learn from Lyn Crumbock of Lower Township, the recycling coordinator for Cape May County. Her important message focused on plastic bags, and the many ways in which they can hinder recycling.

Crumbock said the plastic bags often get stuck in the recycling machinery. That is why they should be brought separately to businesses and other places that accept them for recycling. Also, she said, other recyclables should not be stored in plastic bags, as the county won’t accept the contents for recycling.

“We won’t rip into the plastic bags to get the contents,” she said. “It would slow down the recycling process, and we don’t even know what the contents are. So, these plastic bags, and their contents, are brought to the landfill. Even with the good intentions of residents, we can’t recycle items given to us in plastic bags.”

The student’s work resumed back at The Flanders Hotel, a short walk from the Music Pier on the boardwalk, where the students attended various workshops and learned about the NJCCC’s litter survey, now underway statewide. Huber hoped many of the students could serve as volunteers in their communities, as the litter survey requires visits to hundreds of sites in New Jersey over the course of 2018.

Besides all the hard work, there was plenty of fun. Students joined in Zumba classes, watched a dazzling magician and enjoyed music, as they interacted with kids from schools in urban, suburban and rural communities.

As it is the 10th anniversary of the Environmental Exchange, Huber said the group welcomed back former participants who continue to embrace the anti-littering messages they first learned in elementary school.

Jill Baturin of Winslow Township, a retired teacher from Williamstown Middle School, had been involved in NJCCC for 10 years, retiring in 2014. She was happy to bring along a college junior, and two high school students who were among her sixth graders attending the Environmental Exchange.

“When I was at Williamstown Middle School, this was a great experience for me. I am amazed it is still going on,” said Devon Matthews, 17, a senior at St. Augustine Prep School in Buena Vista, who will be attending St. Joseph’s University in the fall to study psychology.

“My advice for these kids is to enjoy every bit of the Environmental Exchange,” said Matthews, as he watched students from East Orange smile for a camera on the Music Pier stage. “I also want them to come away with an important message about littering. It affects everyone. Plastic bags are everywhere. We need to conserve and protect the Earth if we want to keep it alive.”

Tori Crowley, 20, a junior at Rowan University in Glassboro, returned to the Environmental Exchange to interact with the students from Willamstown Middle School, her alma mater. She talked about a recent, two-week trip to India, where she had the opportunity to student teach.

“There was litter all over the roads and streams,” Crowley observed. “Many people in New Jersey really don’t know how important the anti-littering campaign is. I feel angry when I see a candy wrapper on the ground. But many don’t realize how far New Jersey as come, compared to other places in the world.” 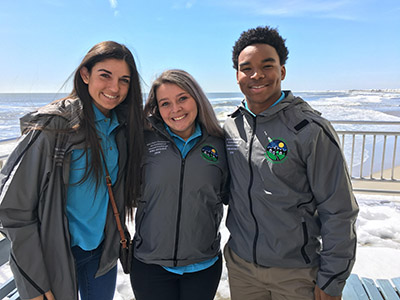 Madison Foti, 16, a junior at Williamstown High School; Tori Crowley, 20, a junior at Rowan University in Glassboro;
and Devon Matthews, 17, a senior at St. Augustine Prep School in Buena Vista celebrated the 10th anniversary of the Environmental Exchange. 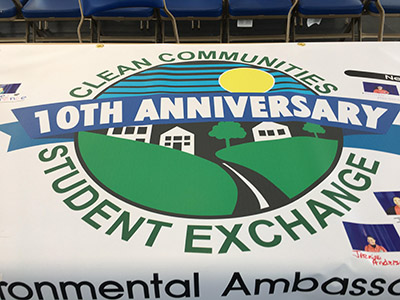